Our latest exhibition, Young Carers in Charge, is now open at the People’s Story. It’s the culmination of a partnership project with national charity, Children in Scotland and Edinburgh Young Carers.

Young Carers in Charge is part of a nationwide project led by Children in Scotland which aims to broaden the participation of children and young people in heritage settings across Scotland.  Children in Scotland approached us to be their Edinburgh-based heritage partner and we’ve been delighted to work with them.

During October and November we ran workshops with a group of young carers aged 9 – 16. We explored the young people’s understandings of heritage and discussed different options for the project. The group decided that they would like to hold their own exhibition and so they heard from curators Anna and Lyn who talked to the group about how to plan and organise an exhibition. We then spent three sessions at the Museum Collections Centre where Collections Care Officer, Gwen gave the young people an insight into the collections and showed them how we care for museum objects.

The young people then selected items from the museum collections to display in their exhibition, and they were invited to include significant items from their own lives. The objects represent subjects that are important to the young people, including family, sports, hobbies and sweets! The exhibition also gives an insight into some of the issues that young carers face.

Young Carers in Charge is on at the People’s Story until 31 March 2019. 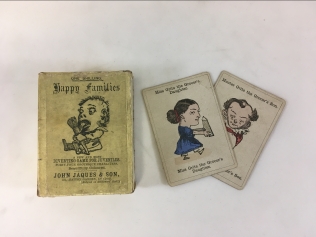 Some of the objects chosen by the young people.

This entry was posted in Uncategorized. Bookmark the permalink.